My mom used to want to be a paleontologist when she was a kid, and my six-year old loves the idea of finding and digging up fossils and rocks, so this weekend, when my mom came to visit, I pulled out an activity that I’d had up my sleeve for a while: a paleontology dig.

I get inundated with educational toy catalogs before Christmas every year, and in one of them is a dino dig kit–a kit that seems too expensive for something that could be easy to make. I had it in the back of my mind that I wanted to create a dig for my older son, when I came across a blog by a creative mom with the same problem. The blog detailed how she created one dig, then perfected her plan with a second dig, making some of the fossils out of a hard concoction that wouldn’t break when her son was chipping away, and making the surrounding material using Plaster of Paris mixed with sand.

I decided that it should be easier than that. My son is a very imaginative boy, and I knew he didn’t need a rocklike substance to chip away for him to feel like a paleontologist/geologist. Then I remembered our cloud dough. 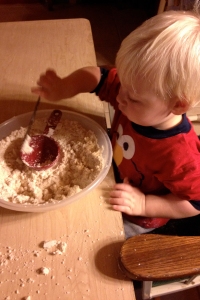 About a month ago, both of my kids had a blast playing with homemade cloud dough. It was one of the easiest things I’ve ever made, and it was one of the coolest things my kids have ever played with. I wished I’d had a sensory table to put it in, but I put it in a big plastic bowl and added measuring cups, a plastic knife, and cookie cutters. Both my six-year old and my 21-month old were mesmerized by it. So I pulled it out again when I decided the Plaster of Paris was too much trouble and a waste of money.

(I cut the recipe in half for play in a large Tupperware bowl.)

Before I presented the bowl to my son, I buried some pop-apart plastic dinosaurs in it, as well as some shells and some rubber bats from our Halloween decorations. I pulled out a thin paint brush to use the handle to pick out the artifacts and the brush end to brush off the dust. I set him loose on it with my mom while I cooked supper and my toddler used a monster truck and cookie cutter with Play-doh across the table. 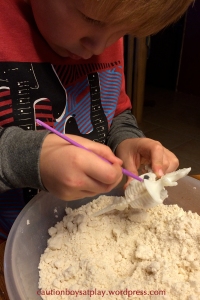 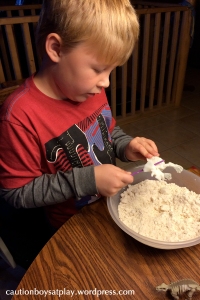 Both my son and my mom were brilliant. She took his lead, and when he gave her the artifacts, she picked up the role of museum curator, accepting his deliveries, talking to him on the phone about the excellence of his work, and putting them on display in her kitchen-table museum. I smiled the whole time I was cooking, listening to their play. The child-directed play that is so essential to a child’s development made my first-grader feel so important, it’s no wonder that he asked for a second round. When I floundered, not prepared with appropriate items, he came up with the idea of using the rocks that he had collected this summer; I obliged, and thus, a geologist was born.

It also added a lot to the museum curator’s displays. 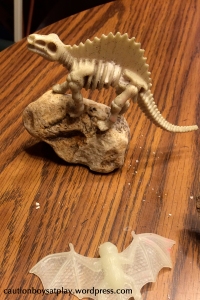 When that was done, he found some rocks that I had used in a table-top fountain, and I said yes again. There are too many times a parent must say no to a child; it is fun to say yes, and it is even more fun for the child to hear yes. I’m glad my mom showed me how much fun it can be for a parent (or grandparent) to say yes–and go all in too. And I hope I get a chance to say yes to paleo-pretending again sometime.